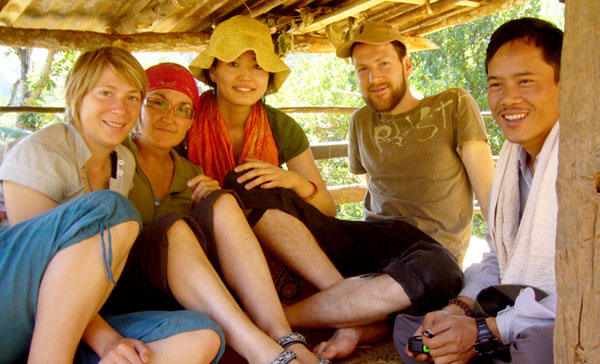 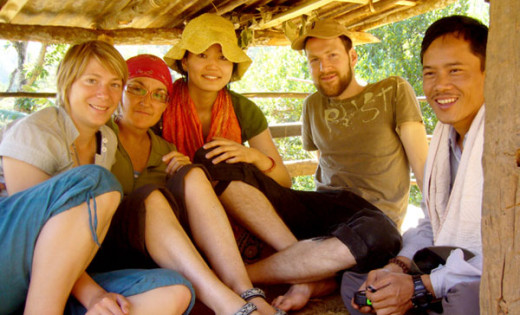 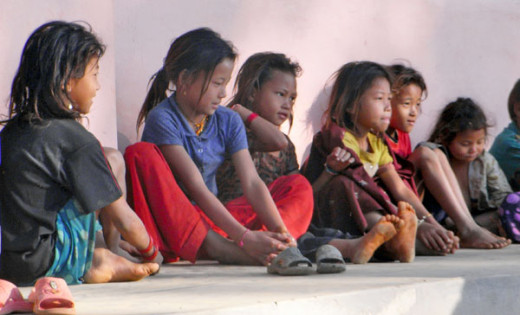 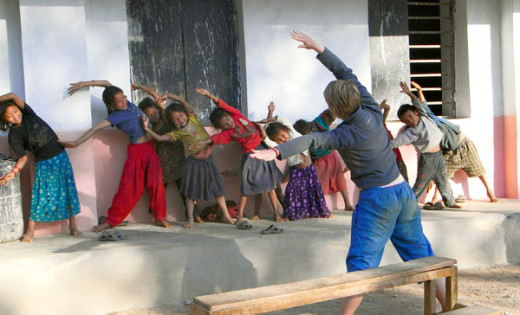 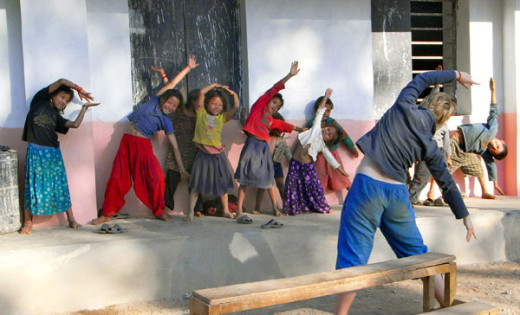 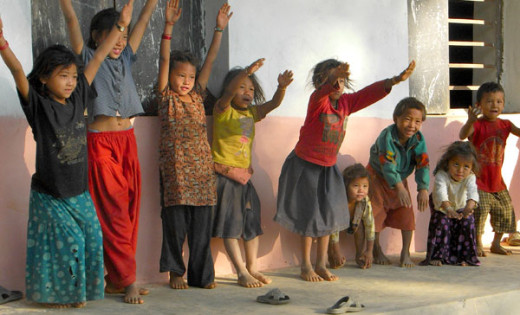 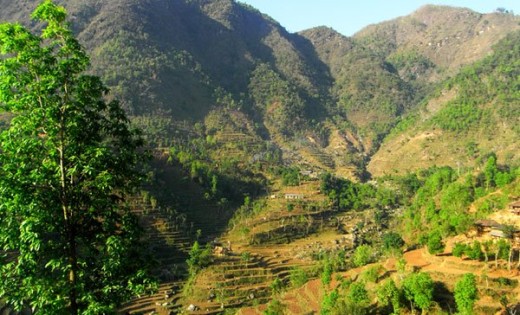 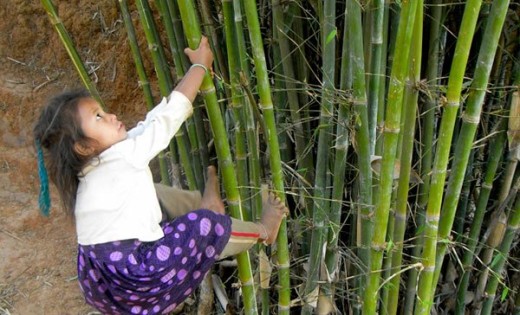 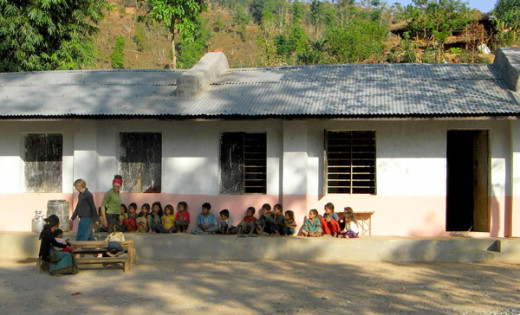 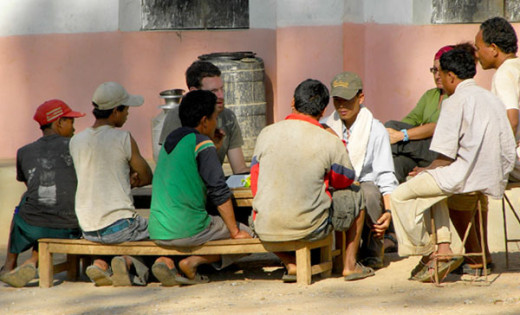 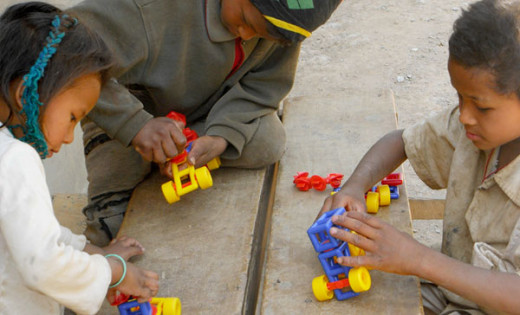 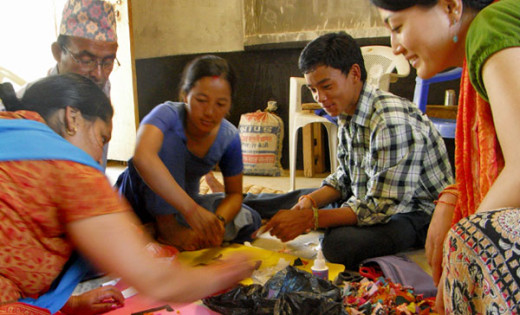 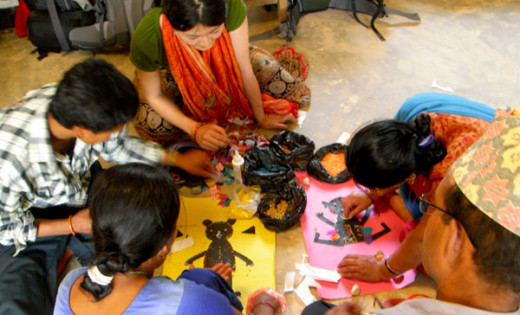 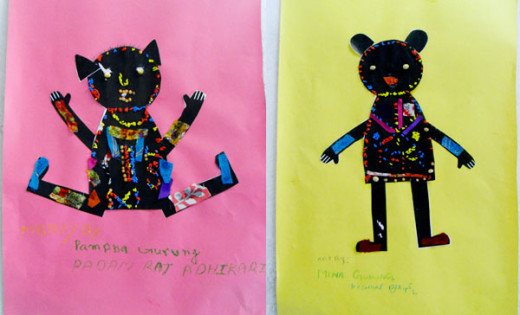 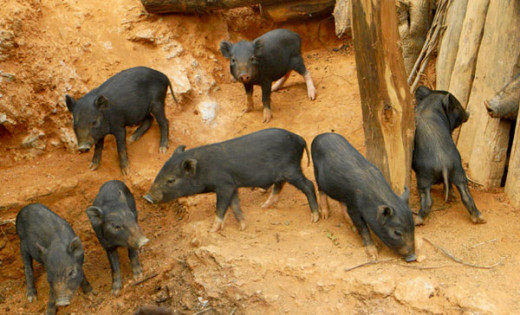 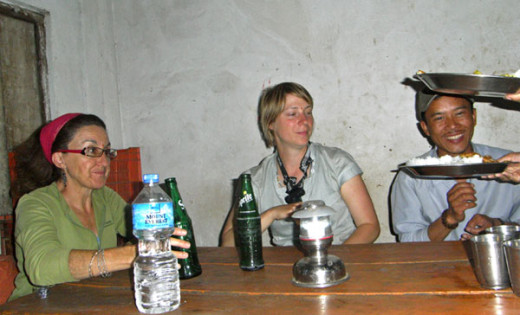 We awoke early (6.00am) to the wonderful sounds of children banging on the window shutters and door, calling our names. One thing we were all getting used too, was that here in Nepal there is no such thing as a lye-in. So, we got ourselves up splashed our faces, there’s no bathroom just a big tub of water, and we were ready to start the day ahead.

First, we visited the South of the village where we would be staying from now on, in a family’s house. Actually, the family whose house it is no longer live their, they have moved into another house near the main highway, 40 minutes walk away. We will be having our food, dal bhatt, cooked for us by the mother of the house next door to where we will be staying.

This family, I lived with when I stayed here by myself last year, and since then they had built a little veranda infront of their house, you can see all of us sitting in it in pic 1 above. It’s main use is to protect them from the midday sun and the mother and father of the house are using it to sleep under during the hot weather season. It’s very simply built, but does the job perfectly.

So, we had our first dal bhatt in the village this morning, and the first thing we all reailsed was the limited ingredients, high level of salt and massive amounts of rice. Most of us struggled to eat the large amount of rice, and we were given simple dal, and potato curry which had a few green leaves mixed in the sauce. It was important for us to see the difference between eating with a comfortable family in Bandipur, and a poorer family in the village, for us to understand the lack of nutrients the village people intake. Of course this has a particularly negative effect on the children, as we have already noticed of their physical conditions, and I’m sure we will see in the mental abilities when working in the school. I’ll keep you updated on this subject.

Now, the temperature was rising and we had to make our way down the valley side, cross the dry river and up the other side towards the school to begin another day of training.

Something we all noticed, is that where we are eating, and where we will be living, there is not much concept of time relative to the clock, things go at their own pace. So straight away we can see why often, the children arrive late at school as no pressure is put upon them by their parents, as still, it is not seen as a priority for them. This is an area we really want to influence and hopefully change in the coming years.

Today in the school, we had quite a few children hanging around even though it was still school holidays. I guess they are intrigued by our presence. Therefore, Jolana decided to use her Yoga skills and do some simple excercises with the children, which turned out great as you can see in the pictures above (pics 2-5), and video below. Also, after the excercise Angela used her skills as a singing teacher and put them into practice with the children, and even Mon and some village men too! It makes quite a funny watch, check below.

Whilst having a meeting with some of the villagers (pic 9), Angela & Jolana decided to give the children something to concentrate with, using the highly valuable, suitcase of tricks Angela brought with her. As you can see in pic 10, they chose the building blocks which captivated the children, it was great to see. So we were able to have our meeting in peace, it was great!

In the afternoon Yoshie did a preparation creative workshop with the teachers, before involving the children next week. You can see how involved they became in pics 11 & 12, and then the finished articles in pic 13. Yoshie was trying to teach the Teachers that by using local food materials, and cloth combined with paper, you can get the children to have some creative fun at little cost. Also, by using bright coloured paints you can liven up the food materials, as you saw in the previous blog, ‘Preparing for Workshops’.

We had a good day, and as a reward one of the teachers, Pampha Gurung invited us to her house for dinner, which is on the highway about a 30 minute walk from the school. You can see Angela, Jolana & Mon getting ready to recieve their dal bhatt, and after a long day we were all looking forward to it. Also, because the teacher is more comfortable than many in the village, the quality and range of food is higher. A good meal to end the day with, and as a treat a bottle of Sprite to wash it down with.