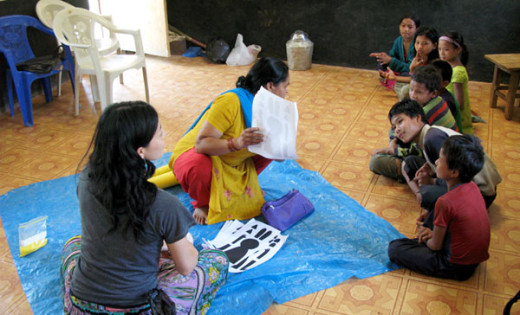 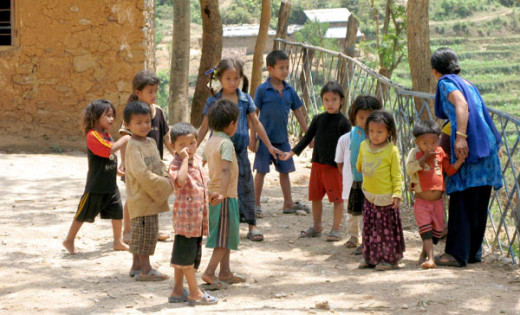 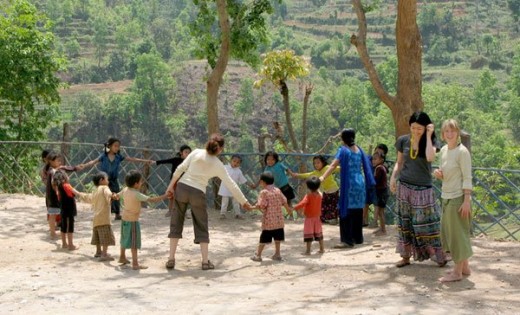 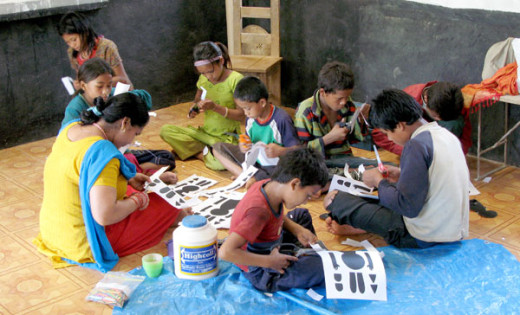 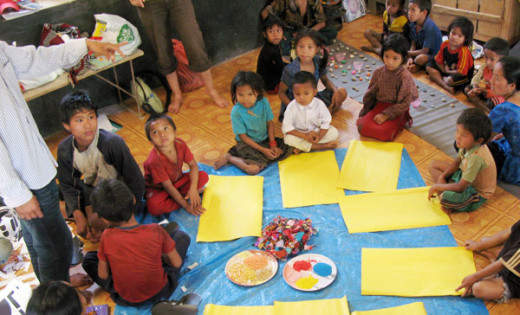 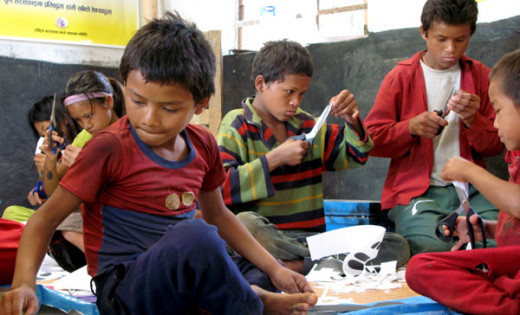 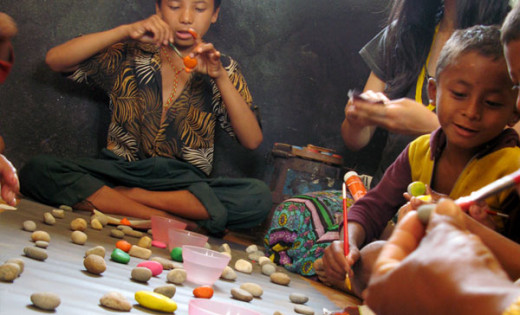 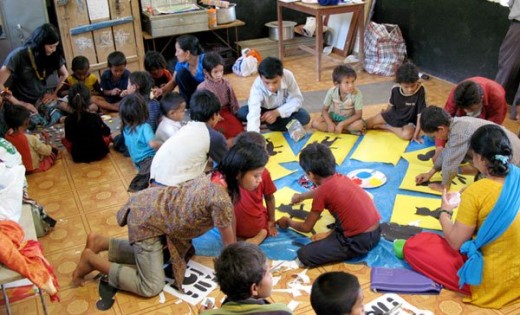 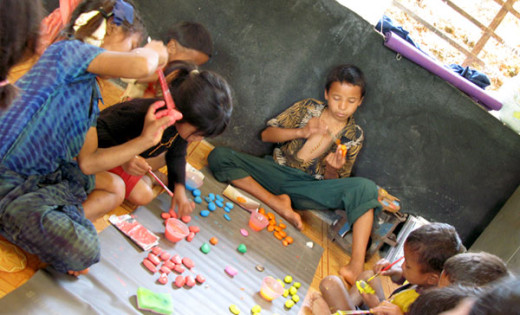 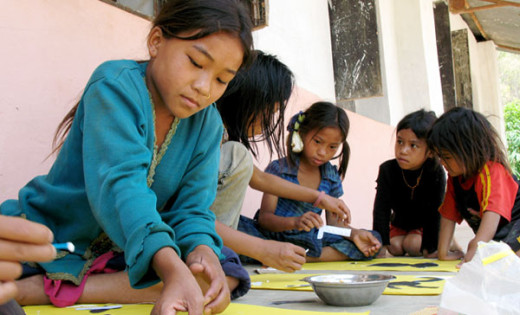 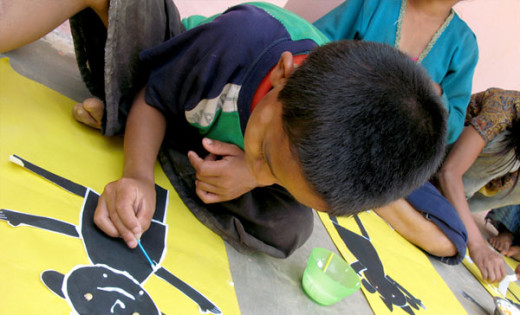 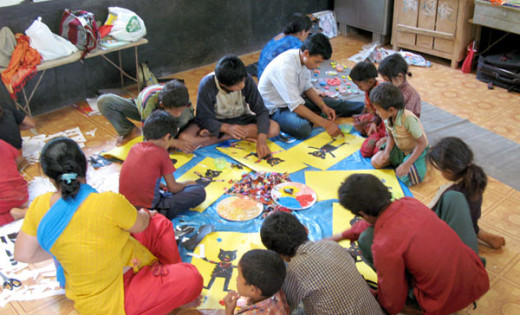 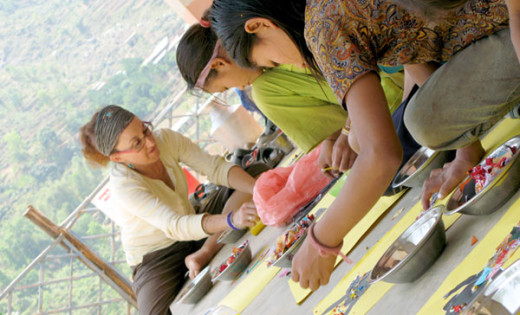 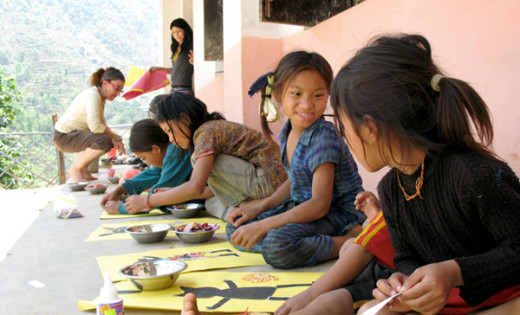 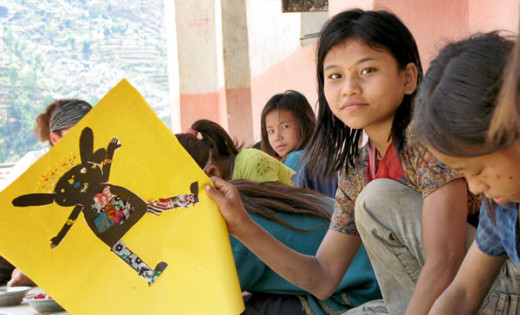 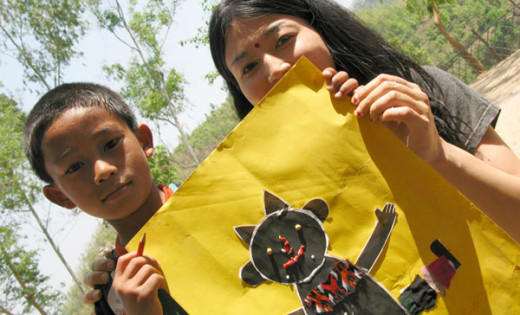 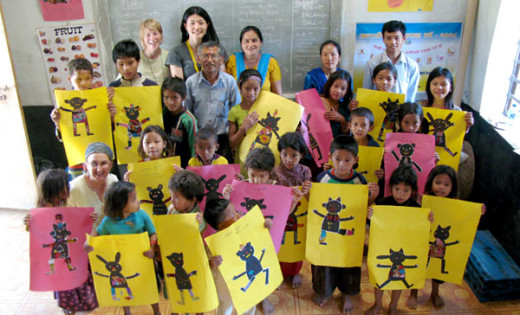 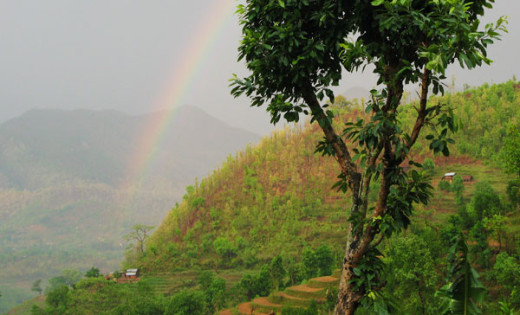 This day, as many have started was to go with the flow, something we were all trying to get used too! But of course, Yoshie had made plans, as you may have seen in previous blogs (click here), bought the neccessary materials and was ready for the day. But as for the children’s attendence, that was left to them, maybe a few, maybe a lot as they were currently on school holidays. And at first, when things started we may have had only about 10. Then quickly the word spread and more curious children appeared, more than 25 in the end.

It was now necessary to break into groups, so Angela and one of the teachers took some outside to do some singing and other activities, whilst the first bunch were cutting away some shapes of ears, face, arms, bodies and legs for their collage work. For most, if not all, it was their first experience of using a pair of scissors. But they very quickly picked it up. Also, because Yoshie had previously done this workshop with the teachers (click here) she wanted them to take control working with the children, and along with Angela and Jolana they would support the teachers, and they did.

Then after the cutting came the most fun part, using sticky, white PVA glue, which is easy acccesible in this part of Nepal, to make their characters on the yellow or pink paper bought in a Bandipur stationary shop. Then to give their characters some pizzaz, a tailors in Bandipur had donated lots of scrap fabric, and Yoshie cut into strips for the kids to stick onto their characters. Also before coming to Aandhimul, with Angela & Jolana they had coloured rice, lentils, and dried peas using bright acrylic, water based paints as seen in the blog from the 7th April ‘Preparing for Workshops’. These were also used by the children to stick onto their characters, to bring them to life.

As the afternoon progressed, I became amazed at seeing so many of these children who are usually running around, making noise, being so concentrated. They were loving it and so focused. Not one caused any trouble or problems, as you can see from the pictures above and video below.

What happened this day, and in all the training workshops has made me realise how important creativity, participation and interaction are within education no matter where in the world.

If you are interested in seeing more of Yoshie’s creative workshops, and her work, please visit her own blog click here.