The school and the community are really happy to see that has been improving over these past few years, especially since our new project manager Bikrma Piya has been working for the project. And so, with the growth of children attending many have asked that the school increases in size to Class 5.

However, there is no longer any space to house these children. This is where a proposal to build a new nursery building not far from the main school has been put forward. Then the space where the nursery was can be used for the new Class 5.

On August 30 there was a meeting between our school and the Youth club. On that day the two parties signed on a contract paper. The Youth club is ready to give this land to build nursery building. Though in our project manager’s opinion, he thinks it is not practical to build the nursery building on that land because it is little bit far from the main school building. So it is difficult to be supervised by headteacher. One current student, Abigel’s father John, told Bikram that he is ready to provide land nearby school.

In the meantime, our project manager, along with members of the school committee, commissioned an engineer to survey the land and put together some drawings for this new build, and the project covered the costs of this drawing. You can see this drawing in the following document Aandhi Bhari Primary School new nursery building plans.pdf. 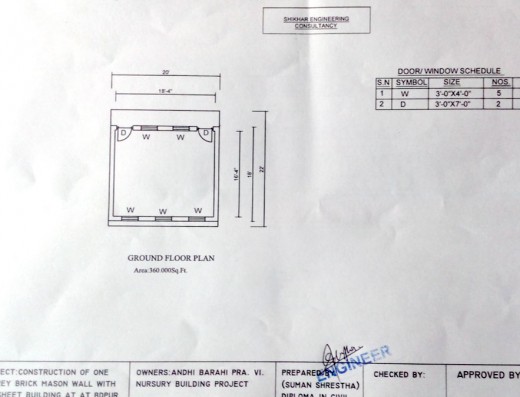